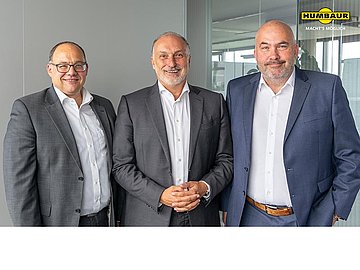 In a dynamic business environment, companies need to make decisions quickly and respond flexibly. In order to strengthen his company and place it a position to be even more effective, Managing Partner Ulrich Humbaur has appointed his long-standing management team of Oliver Czech and Christian Dieminger as Managing Directors.

Humbaur GmbH presents its new leadership team: Managing Partner Ulrich Humbaur has appointed his long-standing management team and authorised officers Oliver Czech and Christian Dieminger as Managing Directors. As a result of this, the new appointees have been assigned expanded responsibilities and powers to ensure that the company will be able to respond dynamically to any challenges it faces in the future.

"The company has grown substantially in the past few years. We are delighted with this, but it does of course present us with the challenge of adapting the organisational structure to the company's current size so that we are also well positioned for the future", says Ulrich Humbaur, the businessman who is not only the driving force behind the eponymous trailer manufacturer, but who also put the trailer manufacturer Kögel back on the road to success following the takeover in 2009. Due to this, the Humbaur name is inextricably linked with economic success in Swabia.

"I am extremely pleased about the faith that has been placed in me and the opportunity I now have to help shape the future success of Humbaur," says Christian Dieminger, who as COO will focus on the areas of development, technology and production in particular.

"Humbaur is not only a manufacturer of trailers and FlexBox vehicle bodies, it is also a brand. Strengthening and raising awareness of the brand is one of the first challenges in my new role", says Oliver Czech, who as CSO is responsible for the areas of sales, marketing and product management. "We will adapt the sales structure to meet changing needs and thereby ensure the long-term success of the company."

Image caption: Joint commitment for a strong company: the Humbaur management with Christian Dieminger, Ulrich Humbaur and Oliver Czech (from left to right).

Please note: We forward offers and inquiries regarding advertising to our agency France MedienPartner GmbH for examination.

HUMBAUR is one of the largest companies in the world of trailer and vehicle bodies. The owner-managed family company offers around 420 different trailer models as standard for both commercial and private customers, as well as 230 models in the FlexBox box body range. Its 500 employees produce around 52,000 trailers each year. The expert in trailers and transport solutions with total weights ranging from 750 kg to 50 t has a national and international presence, and also manufactures customised solutions. Over 500 dealers in Germany and 26 other European countries offer local contact partners. More at: www.humbaur.com